Today I am happy to be a part of the blog tour for One Good Cowboy by Catherine Mann, hosted by Lola's Blog Tours. Be sure to check out all the stops on the tour (whole tour schedule here). 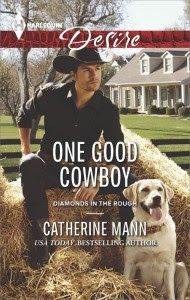 From Ex to Eternity?

To inherit his family's empire, Texas cowboy-turned-CEO Stone McNair must prove he has a heart beneath his ruthlessly suave exterior. His trial? Finding homes for his grandmother's rescue dogs. His judge? Johanna Fletcher, the woman whose heart he broke.

Sure, Johanna can handle a week traveling the country with her ex-fiancé to fulfilll his dying grandmother's request. She and Stone want different things—plain and simple. But there's nothing plain about Stone, or simple about the heat that still flares between them. One week may not be long enough.

Top 10 Reasons to Love a Cowboy Hero By Catherine Mann
10) The way he wears those jeans, low slung, no need for a designer fit, his BODY is designed and muscled by nature!
9) Family comes first. ‘Nuf said.
8) The cowboy hat, not worn out of affectation but a part of their “uniform” and working the land.
7) Old fashioned values and manners, how he says yes, ma’am and means it.
6) Connection with the land. There’s a timelessness and earthiness to a cowboy, a man for all ages.
5) He’s hard working and has hands with calluses and scrapes – manly hands!
4) Speaking of hands – He’s handy to have around. Cowboys know how to fix things.
3) Dancing. Ever see a cowboy without rhythm? Line dancing, square dancing – or best of all – slow dancing. Yum!
2) Sun weathered good looks. Gotta love the way their eyes crinkle at the corners when they smile.
1) My personal favorites – cowboys love animals, whether it be his dog or his horse. That love and tenderness shines through. (Dreamy sigh!)

“Gentlemen, never forget the importance of protecting your family jewels.”
Unfazed by his grandmother’s outrageous comment, Stone McNair ducked low as his horse sailed under a branch and over a creek. Gran prided herself on being the unconventional matriarch of a major jewelry design empire, and her mocking jab carried on the wind as Stone raced with his cousin.
Alex pulled up alongside him, neck and neck with Stone’s quarter horse. Hooves chewed at the earth, deftly dodging the roots of a Cyprus tree, spewing turf into the creek.
Even as he raced, Stone soaked in the scents and sounds of home—the squeak of the saddle, the whistle of the wind through the pines. Churned earth and blue bonnets waving in the wind released a fragrance every bit as intoxicating as the first whiff of a freshly opened bottle of Glenfiddich whiskey.
This corner of land outside of Fort Worth, Texas, had belonged to the McNairs for generations, their homestead as they built a business empire. His blood hummed when he rode the ranch. Ownership had branded itself into his DNA as tangibly as the symbol of the Hidden Gem Ranch that had been branded onto his quarter horse’s flank.
Outings on the ranch with his grandmother and his twin cousins were few and far between these days, given their hectic work schedules. He wasn’t sure why Gran had called this little reunion and impromptu race, but it had to be something important for her to resort to pulling them all away from the McNair Empire.
His other cousin, Amie, galloped alongside Stone, her laughter full and uninhibited. “How’re the family jewels holding up?” Without waiting for an answer, Amie urged her Arabian ahead, her McNair-black hair trailing behind her just like when she’d been ten instead of thirty. Rides with their grandmother had been a regular occurrence when they were children, then less and less frequent as they grew older and went their separate ways. None of them had hesitated when the family matriarch insisted on an impromptu gathering. Stone owed his grandmother. She’d been his safe haven every time his druggy mother went on a binge or checked into rehab.
Again.
Damn straight, he owed his grandmother a debt he couldn’t repay. She’d been there from day one, an aggressive advocate in getting the best care possible to detox her crack baby grandson. Gran had paid for her daughter to enter detox programs again and again, with little success. Year after year, Gran had been as constant as the land they called home—for his cousins, too.
And she’d given each one of them a role to play. Alex managed the family lands—Hidden Gem Ranch, which operated as a bed-and-breakfast hobby ranch for the rich and famous. Stone managed the family jewelry design house and stores.
Diamonds in the Rough featured high-end rustic designs, from rodeo belt buckles and stylized bolos, to Aztec jewelry, all highly sought after around the country. If everything went according to plan, he intended to expand Diamonds in the Rough with international offices in London and Milan, making the big announcement at a wild mustang fundraiser this fall. And Amie—a gemologist—was already working on designs for new pieces to meet the expected increase in demand
Yes, the world was finally coming back together for him. After his broken engagement knocked him for a loop seven months ago…
But he didn’t want to think about Johanna. Not today. Not ever, if he could avoid it. Although that was tough to accomplish, since Johanna worked for Hidden Gem Stables as a vet tech. He’d missed her this morning when they’d saddled up. Would he bump into her after his ride?
The possibility filled him with frustration—and an unwanted boot in the libido...

When Stone's sick grandmother asks him to help find new forever homes for her pets, he is unable to refuse even though it means forcing him to spend time with Johanna, his former fiancée. They soon discover that, despite the break up, they still have feelings for each other. As they spend time together, they learn that there were things each of them kept the other from seeing that contributed to lead to their public break up. Another great read from Catherine Mann. Hot cowboys, cute furry friends, family and, of course, love and all the rocky, emotional situations that go along with it. You can't go wrong with a book by Catherine! I'm looking forward to reading more books in the Diamonds in the Rough series! 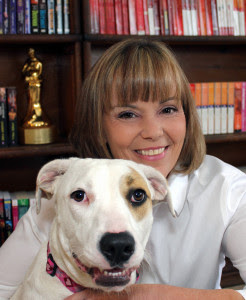 USA Today bestseller Catherine Mann and RITA Award winner, Catherine writes contemporary romance for Berkley, Harlequin, and Sourcebooks, With over two million books in print in more than twenty countries, she has also celebrated five RITA finals, three Maggie Award of Excellence finals and a Bookseller’s Best win. A former theater school director and university instructor, she holds a Master’s degree in Theater from UNC-Greensboro and a Bachelor’s degree in Fine Arts: Theater (with minors in both English and Education) from the College of Charleston. Catherine and her flyboy husband live on the Florida coast where they brought up their 4 children – and still have 5 four-legged, furry “children” (aka pets). Catherine is an active volunteer with her local Humane Society, serving on their Board of Directors and fostering puppies and special needs dogs (she stopped counting at a hundred). She recently checked off a major item on her “bucket list” by completing the hands-on training for the Florida State Animal Rescue Coalition. Catherine enjoys hearing from her readers and can be found online daily. To receive an autographed bookmark, send a SASE to: P.O. Box 6065, Navarre, FL 32566

We've got two great giveaways for you today! There is a tour wide giveaway for a 25$ amazon gift card and a chance to win your choice of either For the Sake of Their Son or the 2-in-1 book Grayson's Surrender/Taking Cover.  For a chance to win, enter the rafflecopters below.
a Rafflecopter giveaway

Posted by Stephanie at 8:36 AM