This is my stop during the book blitz for Wedding at White Sands by Catherine Mann. This book blitz is organized by Lola's Blog Tours. The book blitz runs from 22 till 28 June. 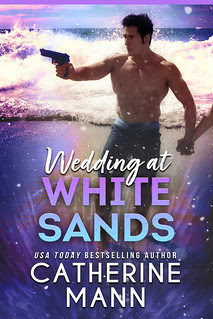 Private Investigator Allie St. James needs the case of the century to pay her bills. She doesn’t need a seven year old client who claims someone’s trying to kill his dad. But somehow her soft heart lands her at a corrupt Florida Key’s resort and into a fake marriage with the boy’s hunkish – widowed – father.


Entrepreneur Jake Larson lost his wife in a car accident that left him with injuries ending his career as an agent for the Air Force’s Office of Special Investigations. He has no use for relationships, not even for his matchmaking son. But since White Sands Resort scammed his parents, Jake reluctantly agrees to assist state police in their investigation. Even when protecting his cover means getting close to a pretty female private eye who’s disrupting not only his case, but also his very peace of mind!

“How much do you cost?”
“Pardon me?” Allie St. James, Private Investigator, glanced from the open file to the scruffy male silhouetted in her office doorway.
Great. Another client who couldn’t pay. More than her services, he looked like he needed an ice pack and a new pair of jeans. He also lacked a few front teeth, but then what elementary school kid didn’t?
“What am I gonna have to pay you?” The gap-toothed boy shuffled into her cluttered workspace, the glass door smacking him on the bottom as it closed.
“Well, that depends.” Her boardwalk mall agency attracted an odd assortment of wander-in clientele, but this one took the prize. For safety’s sake, she would play it through, discover who his parents were, then chew them out for allowing their son to roam the streets of Fort Walton Beach, Florida unsupervised.
Allie tossed aside the file, just missing the lopsided pile of unfinished billing. Palms flat against the edge of her desk, she pushed to her feet. “I’ll need some information first, like your name.”
“Oh, uhm.” He inched further inside, his tennis shoes squeaking against cracked tiles. “Robbie. Uhm, I mean Robert. Robert Larson.”
“Hello, Robert. I’m Allie St. James.”
He chewed his bottom lip indecisively while tracing the grouting with his toe. Rush hour traffic honked and roared past as she sized up her prospective client. He must be around seven or eight, like her youngest nephew. Robbie’s white blond hair shone, the chili-bowl style cut glistening with health. New high tops. Video gamesticking out of his backpack.
The little guy came from money in spite of the busted knee on his jeans. Possibly a neglected rich kid? Plenty of parents substituted toys for attention. She could identify with that. After all, she’d lived it with her own father. Her old man may have been prompt with his child support payments, but his time had been in short supply.
The boy looked ready to bolt out the door. She had to get him talking, fast. Allie snagged a note pad from her middle drawer. “Why do you need to hire me, Robbie, uh, Robert?”
Prepared for his pitiful saga of a missing Spot, she perched a hip on the corner of her gunmetal gray desk. Maybe a playground bully had stolen his book-order money. That would explain the black eye and torn jeans. Her foot swung a lazy dance above the overflowing trash can while she waited.
“Somebody’s trying to kill my dad.”

For a chance to win, enter the rafflecopter below:
a Rafflecopter giveaway

USA Today bestseller Catherine Mann writescontemporary romance for Harlequin, Tule, Sourcebooks and Berkley. With over seventy-five books released in more than twenty countries, she has won a RITA Award, the Romantic Times Magazine Reviewer’s Choice Award, and the Bookseller’s Best Award. She’s also celebrated six RITA finals, an RT Reviewer’s Award finalist, three Maggie Award of Excellence finals and a Bookseller’s Best win. After years moving around the country bringing up four children, Catherine has settled in her home state of South Carolina. The nest didn’t stay empty long though as she is active in animal rescue. Catherine enjoys hearing from her readers and can be found online frequently on Facebook.

Posted by Stephanie at 5:34 PM