You guys! You have no idea how excited I am that INSPIRE is out! I can't even. It's easily one of my most favorite reads this year. Read on for an interview with Kalli and a great giveaway.

Kalliope lives with one purpose. To inspire. As an immortal muse, she doesn’t have any other choice. It’s part of how she was made. Musicians, artists, actors—they use her to advance their art, and she uses them to survive. She moves from one artist to the next, never staying long enough to get attached. But all she wants is a different life— a normal one. She’s spent thousands of years living lie after lie, and now she’s ready for something real. Sweet, sexy, and steady, Wilder Bell feels more real than anything else in her long existence. And most importantly… he’s not an artist. He doesn’t want her for her ability. But she can’t turn off the way she influences people, not even to save a man she might love. Because in small doses, she can help make something beautiful, but her ability has just as much capacity to destroy as it does to create. The longer she stays, the more obsessed Wilder will become. It’s happened before, and it never turns out well for the mortal. Her presence may inspire genius. But it breeds madness, too. 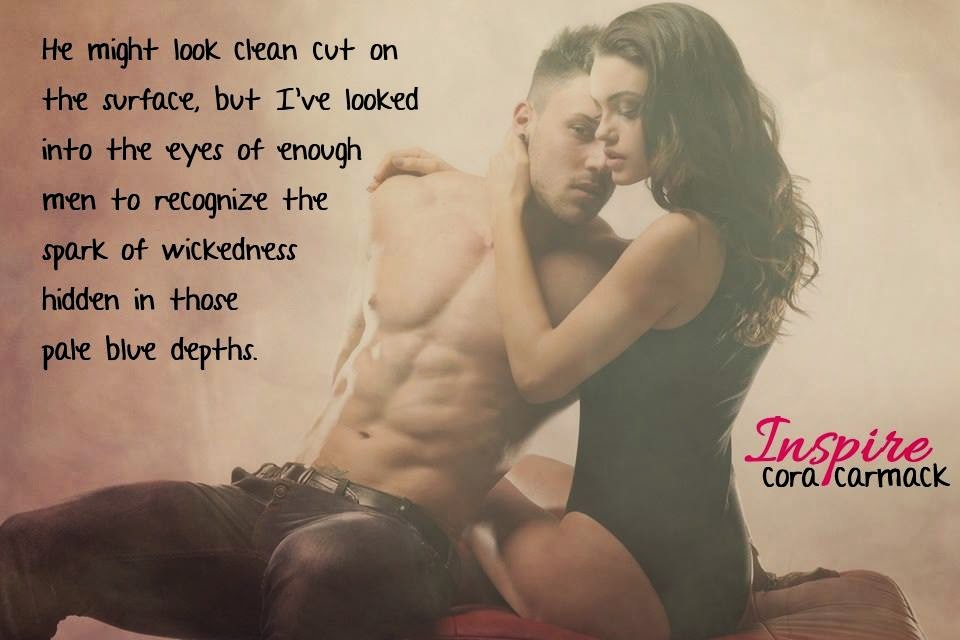 I was lucky enough to be given the chance to interview Kalli and talk to her a little about her life as a muse, Wilder and more.
~~~~~
Stephanie: Hi Kalli! Thanks for joining me today.

Kalli: Hello! Thank you for having me!
Stephanie: How does it work, being a muse? How do you share your gift with the people inspire?

Kalli: Being a muse is 10 % about the art, and 90% about surviving. I was born with a gift. It allows me to inspire mortals, literally opening them up to their own untapped creativity and potential. The part that makes that gift feel like a curse is what comes when I open up a mortal too much. The mind works the way it does for a reason. And if a person crosses too many lines too often, it can have detrimental effects on their emotional and mental well being. So, I never stay with any one artist for long. When I feel like one has reached his or her limit, I move on to the next. And I have to move on because the artists aren’t the only ones who can be damaged by my ability. I can too. The energy keeps building in me, regardless of whether or not I expel it with an artist. If I let it build too long, it’s my emotions and thoughts on which that gift wreaks havoc. As for how I share it… it’s a little hard to explain because it’s always been like second nature to me. Almost like breathing. Except I can do it through my lungs and through every tiny pore on my skin. I don’t have to touch a person to influence them, but touch is generally quicker and more potent. I’ve been at it long enough too that I can usually control exactly how I release the energy and in what quantities.


Stephanie: If you weren't a muse, what would you want to do with your life?
Kalli: You ask dangerous questions. You’d think with how long I’ve lived that I’d have an easy answer for something like this, but I don’t. I am a muse. It’s more than just a career or a hobby for me. It’s how I’m made. It’s who I am. In theory, I’d probably still be involved in the arts in some way because it’s what I know and where my talents lie, but if I weren’t a muse… who’s to say that I would still have any of those talents? I might lose my ability to hold a tune, my eye for fine art, the imagination to shape thoughts into something physical. Would my personality be the same? Would I still have the same confidence with people? It’s a scary thing to think about. But I do think about it. Just… without answers.
Stephanie: You've inspired so many people throughout time, but I want to know who inspires you?
Kalli: I think… mothers inspire me. Fathers, too. I have parents of my own, but in the world I come from… family doesn’t hold the same meaning that it holds for mortals. To see someone—mothers, fathers, brothers, sisters—to see them sacrifice and move mountains for those they love. That’s powerful. Unselfish love. There’s definitely something to be inspired by in that.
Stephanie: What is it about Wilder that draws you to him? What are your favorite things about him?
Kalli: What doesn’t draw me to Wilder? He is definitely a master of unselfish love. The way he cares about his family, it was the very first thing I noticed about him. The second thing I noticed was how gorgeous he is. That was probably the third thing I noticed too. And the fourth. When Wilder and I met, he represented everything I had never had. He was steady and caring and real. But at the same time, I couldn’t read him. And when you’ve lived as long as I have, that kind of mystery definitely makes someone stand out.


Stephanie: If you had to pick just one song to describe your life, what would it be?
Kalli: Probably either Timeless by Kate Havnevik or All My Days by Alexi Murdoch
Stephanie: What three words would you use to describe:
Yourself?
Kalli: Longing. Afraid. And… and selfish.

Your life as a muse?
Kalli: Blessed. Cursed. Stagnant.
Wilder?
Kalli: Perfect. I don’t need three words. That one will do.
Stephanie: Thank you again, Kalli for taking the time to sit down with me and sharing a little about yourself.
Kalli: You’re welcome. And thank you for caring.
~~~~~
A big THANK YOU to Brooke and Misha for helping me out with the interview questions. <3﻿ 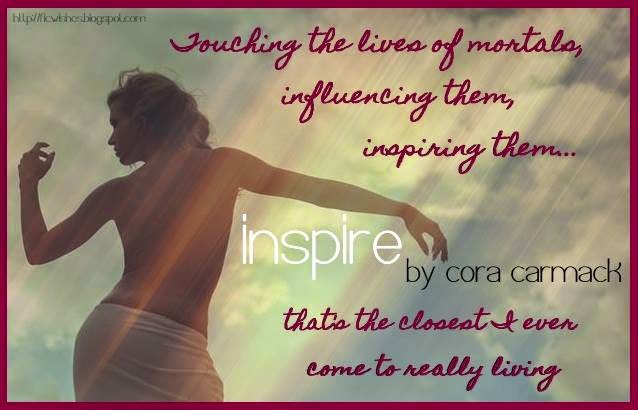 So, if you've followed me for any length of time, you know it's very rare that I read/review paranormal books. But when one of your favorite authors announces that they are releasing a paranormal romance involving Greek Mythology, which I like, there's not much you can do except add it to the top of your reading list. And that's exactly what I did when Cora announced that she was releasing INSPIRE.
INSPIRE is the story of Kalli, an immortal Greek muse who is destined to live a solitary life alone, inspiring the creative juices of those in the arts. Then she meets Wilder. She is drawn to him in a way that she's never been before. Now she must decide whether or not to risk being with him or letting him go.

I really can't even begin to describe how much I loved this story, these characters and everything in between. INSPIRE took me on a roller coaster of emotions that left me reeling. Cora blended the new adult contemporary and paranormal genres perfectly. There isn't much more I can say without giving anything away. If you're a fan of Cora, new adult or paranormal romance, I would definitely urge you to pick up INSPIRE. You won't regret it!

Cora Carmack is a twenty-something writer who likes to write about twenty-something characters. She's done a multitude of things in her life-- boring jobs (like working retail), Fun jobs (like working in a theatre), stressful jobs (like teaching), and dream jobs (like writing). She enjoys placing her characters in the most awkward situations possible, and then trying to help them get a boyfriend out of it. Awkward people need love, too. Her first book, LOSING IT, was a New York Times and USA Today bestseller.
Website | Twitter | Facebook | Goodreads

a Rafflecopter giveaway
Posted by Stephanie at 7:26 AM